The Wizarding World of Harry Potter at Universal Orlando and Universal Studios Hollywood has already become a worldwide sensation, sprinkling a bit of extra of magic on both sides of the USA. You can ride the Hogwarts Express, buy a wand in Diagon Alley and sip cold Butter Beer in the sun. But, did you know that there is a spectacular Harry Potter firework show at Universal, lighting up the sky over the famous school of witchcraft and wizardry? The Nighttime Lights At Hogwarts Castle is a combination of music heard in the movies, with lasers, fireworks and, of course, an air of mystery as the four houses battle it out in a colourful evening show at Universal’s Islands of Adventure Park and Universal Studios Hollywood.

Even though Universal Orlando do not reveal official visitor numbers, according to Visit Orlando, the destination now welcomes over 70 million visitors every year and many will be there for a chance to see JK Rowling’s world come alive before their eyes. After The Wizarding World of Harry Potter opened at Universal Studios Hollywood, the park began welcoming over eight million guests per year. This is a welcome addition to Hogwarts Castle for muggles to get the Harry Potter firework show they have been wishing for. Now, whether they pick up a broom at Quality Quidditch Supplies or not, this will make sure fans leave on a high.

Where to watch the nighttime lights at Hogwarts Castle?

I took this photo in Hogsmeade at Universal Orlando. The castle is situated within Universal’s Islands of Adventure park, in the Wizarding World of Harry Potter. If you want the best place to stand for The Nighttime Lights Over Hogwarts Castle, head to Hogsmeade early and get a spot alongside the event stage that is used during the day for stage performers. For the best view of the Hogwarts fireworks and show, we stood at the entrance to Hogsmeade, between the town area and the castle on the approach road. This is the best place to stand as you get a fantastic view of the front of the castle and enough vantage to see the fireworks and lasers without any restrictions. Another great place is along the bridge that links Hogsmeade to Jurassic Park, but I preferred the view from the front of the castle.

The best spot to see The Nighttime Lights at Universal Hollywood is slightly to the left of the castle, in front of the Hogshead entrance sign. Don’t worry if people gather in front of you, the angle of the castle from here means you will get a fantastic view of the show.

WATCH THE VIDEO BELOW!

The harry potter firework show – what you need to know

Firstly, it’s technically not a firework show so don’t go expecting a Magic Kingdom-esque sky explosion. The Harry Potter show is actually more technical and intricate – dare I say, magical? A clever use of art projection mapping, coupled with special effects, lasers, pyrotechnics, music and lighting means you won’t be disappointed. I admit to not being a die-hard fan of Harry Potter but I was blown away by this. I thought it was fantastic. The only downside is that it is much shorter than I was expecting. The show only runs for around five minutes. The upside is that there are usually multiple showings on one night and so you get to watch it more than once if you want to. It goes without saying that, obviously, once it gets dark the show looks 100 times better against the night sky.

The other evening shows at Universal Orlando

Next door at Universal Studios, there is also a brand new show that takes place over the main lake. This production is inspired by characters from popular Universal attractions as well as some of the world’s most-loved movies. Universal Orlando’s Cinematic Celebration is a water show at Universal Studios that started in summer 2018, with Universal Orlando describing it as an ‘epic cinema under the stars’. The show takes place on select nights and can be viewed from a lakeside seated viewing area. Excitingly, it combines movie images projected onto a fountain, much like Fantasmic at Disney’s Hollywood Studios and special effects with a full panoramic water screen, pyrotechnics and more than 120 dancing fountains.

Find out everything you need to know about The Wizarding World of Harry Potter’s brand new ride – Hagrid’s Magical Creatures Motorbike Adventure.

WHAT TO DO AT NIGHT AT UNIVERSAL ORLANDO

And that’s not all there is to do at the Universal parks after dark. One of the things I love most about Universal Orlando is that the fun doesn’t stop when the park closes. Between Universal Studios and Universal Islands of Adventure is the brilliant Universal CityWalk – a shopping, dining and entertainment area. Here, there are some of my favourite Orlando restaurants, including The CowFish and ViVo. Find out more about Universal CityWalk on Day Seven of my two-Week suggested itinerary for Orlando

Watch some highlights from The Nighttime Lights Over Hogwarts Castle in our new video:

Read our Complete Guide to Orlando

Where to find the best Walls of Universal

An Insiders Guide to Orlando

Where to get the best photos at Walt Disney World 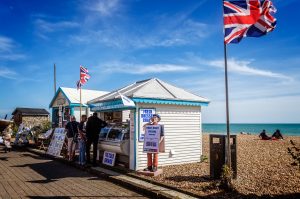 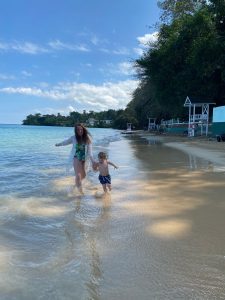