Home » Travel » Lunch in Scottsdale, Arizona – how to eat in the USA

Lunch in Scottsdale, Arizona – how to eat in the USA

The coolest place in Arizona is a stone cold marble bar top. Sat on a high stool, the floor beneath me is a mosaic made from 14 different types of tile, including Mexican talavera with gold in the paint. The bartender sets down a chilled glass of ‘Lisa’s Blend’. Born of the arid, windy, sun-bleached region, just one hour south of Tucson, this 2016 Viognier from Callaghan Vineyards hits directly where the late afternoon sun left off. As I snack on crunchy radishes with date butter and creamy hazelnuts, the restaurant hums into life behind me.

Last year, Charleen won a James Beard award (regarded as the American food Oscars) for her creations at FnB, which was one of the earliest independent restaurants to open in Scottsdale. FnB, along with a few other chef-driven restaurants in trendy Scottsdale Old Town, were pioneers of the local and sustainable dining movement in Arizona.

Around the time that FnB opened its doors, almost twelve years ago, America as a whole wasn’t celebrated as a great food nation. Hamburgers and hotdogs were its famous exports and Mac and Cheese, the country’s favourite dish. Let’s not forget the humble sandwich; Subway currently holds the dubious accolade of being the USA’s biggest restaurant chain. America likes to eat – portion sizes in its mainstream restaurants certainly prove that – but it turns out there is an appetite for quality over quantity too.

It’s not that the USA didn’t have great restaurants before, far from it. The Michelin Guide began issuing stars stateside in 2005 (in NYC) and fine dining is part of the establishment. But, the real taste of America has grass roots. America’s flavour comes from the diverse and cultural heritage found in its neighbourhoods and celebrated in their kitchens. Over the last decade or so, the quiet culinary corners of many U.S states have been simmering away, waiting for their moment. The sweet and smoky aroma of Senegalese street food sizzles in Southwest Philadelphia. In New Jersey, Peru Square in Paterson serves up authentic lomo saltado (stir-fry of steak, onions, and tomatoes) and stewed guinea pig, inciting the zesty mood of Lima.

Off the table, tastes were also changing in the USA. There was a hunger for a healthier, more sustainable existence. Growing tired of generic chain restaurants, the concept of farm-to-fork became desirable to the modern diner. Communities began to realise that supporting your own brought in more people and the increase in foot traffic meant a boost for surrounding businesses. On the tourism trail, restaurants that could be anywhere in the world were losing their appeal. There is something lacklustre about dinner in a destination that completely disappears once you close the door.

Dine from the desert

Scottsdale was an ideal spot for the farm-to-table movement because the climate provides a year-round growing season. Surrounded by the Sonoran desert, many are surprised to find the land is home to more than 250 species of edible plants, giving chefs like Charleen a dynamic range of flavour and texture to play with year round.

In Arizona, ‘local’ cooking is a flavoursome mix of American southwestern, Mexican, Native American and Sonoran desert influences. As the independent scene exploded, chefs from all kinds of backgrounds opened restaurants serving the food they ate with their parents and their parent’s parents. Their stories are part of the experience and together they feed the growing appetite for food tourism. With seven out of 10 travellers* choosing a destination for its food and drink now, personality defining restaurants play a huge role in bringing home that all important tourism dollar.

With this new perspective, Instagram was a game changer. #Instafood was being transmitted onto smartphones across the globe and independent restaurants flourished. It was a way for innovative chefs to showcase their creations and reach a larger audience. This in turn, brought visitors to smaller, less well-known destinations, whose food put them on the map.

This is certainly true of Scottsdale, Arizona. There are daily direct flights with British Airways from London to Phoenix, a 15-minute drive from downtown. It couldn’t be easier to get to Scottsdale, but the entrancing city wasn’t necessarily on everyone’s radar. A glance at FnB’s Instagram feed will do enough to whet your appetite but once you start nosing around, you’ll also discover that Arizona’s foodie hub also happens to be an excellent base for outdoor adventures. From hiking, biking, horse riding and kayaking, to golf, wellness and architecture, you will not be short of ways to work up an appetite.

FnB isn’t the only foodie spot in Scottsdale worthy of the grid either. Around the corner, Diego Pop’s colourful creations look as good as they taste. Further along, delectable desserts from Super Chunk seduce even more visitors to the city, which coincidentally has a choice of excellent design hotels, award winning spas and a handy 330 days of sun every year. All of a sudden, you’re wondering why the hell you haven’t been yet.

Article continues below. RELATED: The best Instagram spots in Scottsdale

The future of foodie America

The future is uncertain for all aspects of tourism at the moment, but there will always be an appetite for food and travel. For your next trip, get a taste of the real America and feed your wanderlust in the small places that are big on flavour.

As someone who will follow their stomach pretty much anywhere, I consider America’s food scene one of the most exciting reasons to go. In Portland, Oregon, I asked Twitter where I should eat breakfast and an hour later I was scoffing glazed breakfast hushpuppies at Screendoor. James Eckrosh, owner of Richmond, Virginia’s The Dog and Pig Show, insisted I try his shrimp and grits made with kimchi butter and roe. I protested. Grits are one American delicacy I’d never been able to get on board with. He got his way; I got the first taste of S&G I’d ever enjoyed. I’d seriously walk back to Austin, Texas to scoop curried pumpkin hummus onto warm homemade Pullman bread from Lenoir, a 34-seat restaurant built in the owners’ backyard.

Like many of us, I was excitably planning my next trip (and meal) when Covid-19 struck, a worldwide disaster and not solely for the catastrophic death toll. Independent restaurants make up around two-thirds of America’s dining and celebrated, homegrown restaurants that always have a queue to get in, like FnB, may not survive. The New York Times reported that 75% of independent restaurants that closed due to the coronavirus won’t make it. It’s a sombre read.

Back at FnB, I consider ordering another dish. I want to try everything, but my waistband is already feeling the pinch. It isn’t my first time here and, hopefully, won’t be my last. After lunch, I take a walk and explore the area, pop into shops; grab a coffee; stumble across a local photography exhibition or gallery. I spend some of my great British pounds on a few keepsakes to bring home. That’s how it works.

In my living room, a hand-carved, Native American arrow sits on the mantel. When people ask about it, I tell them I got it in Scottsdale. Then, I say, ‘you should go there! The food is amazing’.

More of our favourite U.S. cities

Los Angeles: How to spend three days in L.A.

How to spend a weekend in Portland, Oregon

A guide to Virginia, USA

California – a week in Lake Tahoe 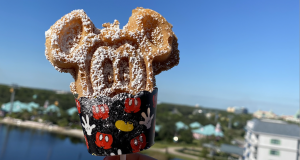