Home » Blog » Bad influence? Is Instagram spoiling travel for everyone else?

Bad influence? Is Instagram spoiling travel for everyone else?

I have a great Instagram husband. He’s not my legal husband, but, yeah, you’ll have to ask him about that. Over the four continents we’ve travelled so far he has patiently waited for me to brush my hair, change clothes, park the car at the perfect angle, clear dinner table mess out of the way. He’s waited for the sun to rise and set. Paused for animals to pass perfectly by in the background; for cars to move, snow to start and rain to stop. He’s snuck into a fancy hotel and gone to the level above to get ‘the’ shot and frequently has to wait for the perfect photo of his breakfast to be uploaded before he can eat it. On the subject of eggs, I’ve definitely found a good one.

The etherial white room at Le Royal Mansour Hotel, Marrakech is one of Instagram's holy grail captures – and possibly the most beautiful room I have ever been in. The laced wrought iron architecture is designed to look like a giant birdcage and, with the sun beaming through the roof, is utterly stunning. Cue me pretending to star in my own one woman production of A Midsummer's Night Dream, complete with spinning and floaty white dress. Obvs. 🕊️ #royalmansour #royalmansourspa #pstravels #Marrakech #Morocco #white #beauty #architecture #myboohoostyle #boohooontheroad

On a trip to Indonesia, face deep in my smartphone I was passionately on the hunt for what was (at the time) the Instagram holy grail. The ‘swing in the sea’ had been popping up on my feed for a year or so and knowing I was headed to that part of the world, I was hungry for my shot at the target. According to geotags, the magical swing – which is perched just above the beautiful blue water and set against an idyllic horizon – was on the island of Gili Trawangan. The island next door to the one we were staying on… oops. Obviously I got straight on the wifi to work out where to pick up the ferry, but apparently, even with the most accommodating travel partner there is a limit in the quest to find the ideal Instagram, and ‘going to another island just to take a f**king photo’ is it.

In the end I got my own way. We actually had a great time on Gili Trawangan but of all the beautiful destinations we visited on our around the world trip, this was one place that stood out to me for all the wrong reasons. Having travelled through India prior to arriving here, you’d think I’d be used to the extremes of life outside the manicured English streets that I live on. However, Gili Trawanagan is a place in paradise that has been ravaged by tourism with an eco-system that can’t cope with the stampede of human life, sinking under the weight of those lining up to post the perfect pose.

The reality is far from photogenic. Building up around the circumference of the island, including yards from the serenity swing, were agitating mounds of litter. Coke cans and nightclub flyers, plastic bottles, sanitary towels, plastic bags, decomposing food, cigarette butts, kids’ toys. Disrespect from those who call the island home and those arriving under the influence of the travel dream. Perfectly pristine on the Internet, but in reality a depressing sign of the times in a world reluctant to change.

The Guardian recently printed that the world’s most beautiful places are facing a crisis of popularity. The result of digital marketing has been outstandingly positive for international tourism, but the negatives that go along with that are starting to rear their ugly heads. In 2016 and 2017, the USA’s national parks saw an unprecedented 330.9 million visitors trample through their gates, which is the highest level ever recorded. As the writer points out, ‘that’s not far off the entire US population itself’. These beauty spots are now increasingly vulnerable to the ugly side of tourism; environmental damage, overcrowding, vandalism and increased crime (to name a few). The Grand Canyon has on average 16,000 visitors a day, which is only slightly less than the official population of Newquay, Cornwall. We don’t want to think about it, but petty crimes, violence, traffic accidents and death will occur when you have that many people in the same place. Even in paradise. (*For the really morbid, an average of 12 people die in the Grand Canyon each year).

Nearby Horseshoe Bend, formally a virtually unknown lookout in Arizona with dramatic views, is one place that Instagram has changed permanently. The remote vista was once just a dusty path with a handful of visitors a day. Now, a giant concrete car park has been built to cope with demands and traffic jams clog up the entry roads and nearby towns. What was a place to be at one with nature is now just another #instabrag.

Throwing it back to the first time we traveled together! Now that November’s here, we can’t stop thinking about our upcoming road trip through Utah & Arizona!

How can we stop the influence of Instagram spoiling travel for everyone?

As respectable and responsible travellers, we know to take our litter and waste with us. The ‘traveller code’ is to take nothing and leave only footprints – but not everyone obeys the rules. Beer bottles and cigarette butts lay in the grass at Machu Picchu. Maya Bay in Thailand, made famous in the film, The Beach, is now closed indefinitely after its ecosystem was ravaged by tourists. In Paris, overspilling bins, pizza boxes and plastic bags line the path to the Eiffel Tower.

Like it or not, those of us who embrace the digital age are all part of the problem. Did Gili Trawngan’s trash make it onto my Instagram grid? Phone in hand, I had the ability to show the world (okay, my 10k followers) what it was really like here. But I wanted to fit in on Instagram. I wanted to prove I could paint the pretty pictures that dominated my news feed. I’d come to this island for ‘the’ photo. I’d waited patiently behind five other women and one man to get it. I got what I came for. So now it was time to hit the beach and top up my tan before disappearing into the sunset of my next Kodak moment.

So are influencers selling a non-existent fairytale? Are their loyal thumb-scrolling followers parting with hard earned cash to see nothing but a mirage? Is that square of idyllic white sand framed by a sea of litter? Those rainbow houses lighting up your feed are actually faded and lacklustre in real life. Were you fooled by filter, conned by a caption? I know I have been.

One such place that always springs to mind is Italy’s Cinque Terre. Researching our two-week road trip around Italy, I was mesmerised by the injection of colour. On social media, higgledy piggledy houses decorating the cliff were as bright and bountiful as a packet of Skittles. I couldn’t wait to take my own pictures; it was the place I was most excited to see. Don’t get me wrong, the Cinque Terre is still one of Italy’s most beautiful and photogenic places, but rocking up, camera in hand, my first impression was disappointment. Duped by dressed up digital images, the view awaiting me fell flat.

But it wasn’t just the faded colorama that irked, I was also surrounded by hundreds of people. And that’s the other Instagram ideology – a personal platform in front of the world’s most visited sights. We’ve all seen it – a beautiful figure, alone in St Mark’s Square, wistfully spinning in a colourful dress cuts quite a dash. But what about the tour groups? The buskers? The hustlers selling selfie sticks and portable phone chargers? Venice is visited by 20 million tourists a year, so where are all the people? I’m afraid to say they’ve gone where no one aspires to go – photoshop purgatory. Invisible. Forever deleted from memory and replaced with perfection in a frock. Sorry to ruin your day, someone probably made that sky bluer too. A recent cringeworthy scandal involved the influencer Amelia Liana who has 508k followers on Instagram. She is accused of deleting crowds of people from her posts, using fake backgrounds and even photoshopping in hot air balloons to her pictures…

What a welcome to Cappadocia! 🎈Obsessed with the setting @museumhotel & couldn’t wait to wear my gorgeous @aspinaloflondon bag 👌Outfit details on amelialiana.com/insta or http://liketk.it/2uTB0 #Turkey #Cappadocia

Influencer marketing is a now billion pound industry and apparently this is how we get our inspiration these days. If so, we can’t complain if things aren’t what they seem, or can we? What happens when the ‘place’ we are being sold doesn’t even exist (in the form it is being showcased)? We’re booking flights and spending money to reach these coveted spots, only to find they are as mythical as a unicorn. A recent clampdown on the liberty of Influencers has caused quite a shake up in the industry. New influencer rules on disclosure and transparency are now being imposed, requiring bloggers and social media personalities to disclose the previously hidden motives behind their posts – such as payment to promote something. If someone is handed dosh to say Canada’s Lake Louise, is good – they must tell you it’s an advert. That backpack they’re always banging on about – if a commission is earned from Joe Public buying into the brand, it needs to be flagged up loud and clear or face significant financial penalties.

In a study commissioned by retail marketing firm Bazaarvoice, and reported in The Drum, 62% of the 4000 consumers surveyed felt influencer content ‘takes advantage of impressionable audiences’. 55% said this was because aspirational posts were ‘too materialistic’ while 54% said influencers ‘misrepresented real life’.

I think that is a fair assessment. However, at the time of writing there are currently no rules about whether the image itself has to be real. There is nothing in the manual to say I have to tell you that plastic bottles and sun-faded crisp packets threatened to ruin ‘the’ shot. The camera never lies, right? The world we live in has changed forever and I don’t think anyone knows what the answer is. Personally, I always do my own research, digging deeper than a photo. I’m no longer blinded by beauty and always have a realistic idea of what a place will be like. Maybe I’m a cynic, but at least occasionally I get a pleasant surprise! I’m going to do more to present a realistic portrayal of destinations on my own social media too, telling the story behind the camera if things aren’t what they appear. Artistic licence can be a positive thing and aspiring images are no new innovation. Influencers are selling us a dream, but it’s up to us to make sure following in their well-travelled footsteps doesn’t become a nightmare.

The most colourful town in America – Scottsdale, Arizona

The best places to get your photo at Walt Disney World

As if by magic – the best Walls of Universal

The most beautiful places in Costa Rica

Pretty photogenic – where to go in Lake Garda

A special place for a special occasion, Mykonos.

Where to find the most beautiful beaches in Sydney 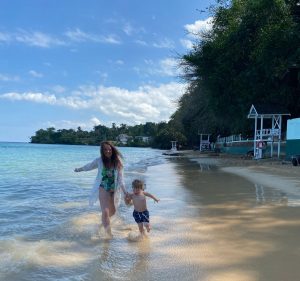