Home » Staycations » A feast for foodies in Plymouth

A feast for foodies in Plymouth

When it comes to holiday weather, some people are lucky. Taking the blue skies, warm days and sunburn for granted, they know nothing of the pre-holiday fear that comes when you’re cursed with terrible weather luck. But I know it all too well…

Send me to the hottest, most temperate places on Earth and I’ll come back with tales of pools and beaches being closed due to a freak sandstorm (Dubai), ‘the wettest May we’ve had in decades,’ (Mauritius) and being grounded without any spare knickers by a cloud of volcano ash (Morocco).

So even though I booked my weekend in Plymouth at the end of August to give myself the best possible chance of good weather, I knew I was probably doomed to failure. And sure enough, the week leading up to our trip was characterised by blazing sunshine and temperatures in the high 20s. Then, as our train left Paddington, it started to spit, followed by two days of cold drizzle and downpours…

But I’m still going to recommend Plymouth, absolutely wholeheartedly. Because despite being desperate for a few days of sun, the weather turned out not to matter at all. Plymouth has enough character, charm, stuff to do, food to scoff and beautiful views to ensure you’ll have a great time come rain or shine.

As the rain clouds loomed outside, we enjoyed the peace, free cuppas and leather armchairs on offer in GWR’s First Class lounge at Paddington, before hopping on the train. The route from London to Plymouth is renowned for its views, and although the journey is fairly long (almost three and a half hours, with tickets starting from £36.50 one way), the pill was sweetened by the scenery.

We snaked our way through stunning countryside and past ocean waves that almost threatened to lick the sides of our train carriage, and spotted the Westbury White Horse carved into the hill in chalk as we passed Salisbury Plain (keep your eyes left). This is definitely a journey to be savoured, not endured, so take a good book and settle down.

On arrival, we checked into the New Continental Hotel, a well-positioned, Grade II-listed building with large, comfortable rooms starting at £75 a night. The family that runs the place has been in the hospitality industry for three generations, and it shows. The staff are all super-friendly – although the larks among you might want to request a room that doesn’t overlook the pub and club opposite, which can get a bit noisy at the weekend (or, if you can’t beat them, you can always join them…)

That first evening, we decided to eat in the Rock Salt Cafe, a small place a 15-minute walk from the hotel. It was (of course) cold and drizzling as we made our way there, and as we passed through a dark industrial estate, we started to wonder if we’d gone (very) wrong with the directions. But then we suddenly popped out onto a road tucked onto which was a small, cosy looking restaurant.

We weren’t expecting much from the food – at that point cold and tired, anything hot would do – but ohmygod… The food at this place was astounding, some of the tastiest food we’d ever eaten! At around £7 for a starter and £15 for mains, it’s not super pricey – and so worth it.

Between two, we tried duck liver parfait and sticky pulled pork to start, mains of slow braised ox cheek and crisp confit lamb shoulder with parmesan truffled chips, and a chocolate pudding. And everything was absolutely perfect. It was the kind of meal that makes you groan throughout, then look up all embarrassed afterwards, wondering who heard you.

We returned to the hotel very full, very happy, a bit drunk and almost up for joining the revellers in the club opposite the hotel. But not quite…

The next morning was spent exploring the area a little – from the modern shops of the town centre, to the cobbled streets heading towards the harbour. On our way, we stopped off at the Plymouth Gin Distillery, which has been in use since 1793 and is the home of Plymouth Gin. It definitely sounded like a place I wanted to be in.

We took a Master Distiller’s Tour, which as an absolute must if you’re a fan of gin – or even if you’re just a fan of booze in general. At around two hours, it’s never dull – a history of the distillery is full of interesting stuff about the building and its gin (including how many thousands of cases were shipped into New York alone during Prohibition), followed by a look at the distillery itself.

Even the shop is interesting, selling bottles of ‘navy strength’ gin at an eye-watering 57% proof – chosen because if it spilled onto the ship’s gunpowder stores, at that strength it would still be flammable.

Conveniently located upstairs is the Barbican Kitchen. We were greeted by the very lovely James Tanner (you might recognise him from his regular spots on Lorraine), who co-owns the restaurant with brother Chris. We started with nibbles of honey-drenched chorizo (ohhhh, yes) and starters of chicken liver parfait (I do love a parfait) and haddock risotto, which were all very good indeed.

We followed up with barbecued pork with veg and a very juicy burger and fries, all of which were delicious, and served by the friendliest waitress of all time in a lovely, airy room. Sadly, there was no room for pudding, so we decided to walk off lunch instead.

Heading to the harbour, we wandered down rain-scrubbed cobbled streets strung with bunting, and marvelled at how pretty everything was. Passing a carousel, popping into the little craft shops, watching fudge being freshly made in a sweet-shop window, and peering into the odd cute cafe along the way, it was all very Enid Blyton.

After grabbing an ice cream and wandering around the enormous Parade Antiques store (which has on display one of Charlie Chaplin’s original suits), we headed back to the hotel for a quick rest (read: full-on nap) before dinner.

Yet again, Plymouth pulled another great meal out of its apparently unending food-hat when we headed for the River Cottage Canteen & Deli. It was turning into a seriously underrated foodie destination! Being a big fan of Hugh Fearnley Whittingstall (he’s referred to, all casually, as ‘Hugh’ on the menu, the only nod to the canteen’s famous owner apart from his books being on sale in the deli), I was excited to try this menu.

Unsurprisingly, it was full of fresh, healthy food, with lots of salads and organic produce on offer. As we sipped a glass of organic wine, we enjoyed some pretzels served with a very nice pea and mint dip. Those were followed up by a baked Cornish camembert with a hunk of bread, a huge organic chicken salad and whole Cornish plaice with herby new potatoes.

Day two took us on a tour of the historic dockyards with Plymouth Boat Trips. Perching on the top deck, we were treated to a commentary by the boat’s incredibly friendly staff (essentially, everyone in Plymouth is incredibly nice) as we took an hour-long journey along the docks. We settled down to hear about the dormant nuclear submarines and not-so-dormant warships docked at Plymouth harbour, and take in the beautiful views.

An hour later, we were ready for lunch (yep, really), so we headed to the Boathouse Cafe, run by Ben Squires, the same man with a passion for all things fishy who runs the boat tours. A family-friendly place renovated from an old fisherman’s store, with great views of the harbour, the cafe serves classic lunch dishes in big portions.

Since the weather was still on the chilly side we went traditional, with a couple of warming hot chocolates followed by burger, chips and onion rings, and fish, chips and mushy peas that totally hit the spot.

In the afternoon we decided to head indoors and take a look around the National Marine Aquarium. Although we felt a bit guilty eating fish then gawping at them, the aquarium is one of the best I’ve been to (and for me, aquariums are like parfaits: I cram as many in as I can).

Featuring a huge tank filled with stingrays, sharks and fish big and small, the enclosure is cleverly designed so you can view it from all angles – above, below, and through a huge wall of glass. It means you can’t fail to spot your favourite creature swimming about, and there are plenty of other tanks showcasing lobsters, jellyfish and turtles, too.

Whether you’re taking a break from the sun or sheltering from the rain, it’s a lovely way to spend a couple of hours, and perfect for families. There are plenty of activities for children, regular talks throughout the day, and a gift shop crammed with plastic clown fish that could be Nemo if you squint.

Our visit over, it was time to head back to the station and enjoy the peaceful ride home. As we got closer to London, the clouds broke, the sun came out, and the following week we were treated to an unbroken run of perfectly sunny, hot weather. Of course…

With the weather against us I could have been annoyed that I chose to have my holiday here in the UK but our visit to Plymouth was one of the best weekends away I’ve ever had – so if you’re cursed with bad holiday weather (or even if you’re not) I really recommend you book your next break there. With so much to do, the weather will be hard pushed to rain on your parade.

Find out more at Visitplymouth.co.uk 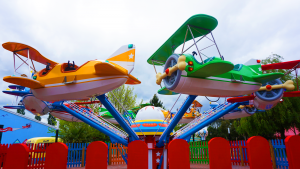 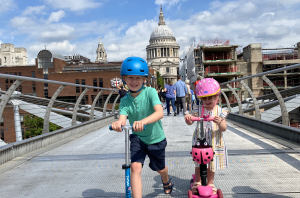