I’m ashamed to say, before this trip I had never been to Italy. I’d always shunned a mini break to the Italian cities in favour of other European hotspots after being put off by tales that Italia was mega expensive. My boyfriend, Simon, and I have got into a happy habit of camping in various places over the last year so I decided to look into how easy it would be to camp ‘euro’ style.

For obvious reasons, most camping sites in Italy are situated outside the major cities with most just a simple train or bus ride in. It seemed getting around would be the complicated bit and as we didn’t fancy interrailing on this occasion, we decided the best way to do a budget trip in Italy was to hire a camper van.

Having never been before, I was staring at pictures of narrow winding roads weaving through the idyllic Italian countryside and my first thought was ‘how the heck am I going to manoeuvere an RV around those?!’. Plus, it turns out that renting luxury RVs, such as these from McRent Roma (more like a boutique hotel on wheels) is not that cost effective if you’re traveling on a budget. Then I stumbled across Spaceships Rentals, a campervan company that specialise in a cheaper version of interrailing and offer, for the budget traveller, a ‘camper car’ option. Compact, cheap and easy on fuel, the camper car turned out to be exactly what we were looking for.

If you haven’t seen our Italian roadtrip in the Spaceship Camper video blogs, this handy link will take you to our YouTube playlist.

We picked up our rental in Rome at Camping Tiber Campsite. The site – which is brilliantly equipped with a pool, large restaurant, excellent toilet and shower facilities, and green tree-lined grounds – is situated at Prima Porta, a half hour train ride into Ferrovia Roma Nord (in Rome city). The campsite also offers a free shuttle from the station and the local bus can also drop you off. At first sight, the van isn’t much to look at – more local buildermobile than cool VW – but the campercar is tardis-like inside. The interior folds out into a large double bed. Simon is 6 foot 1 and with the passenger seat pushed forward he just fitted in, lying at a slight angle, but it was comfortable. Pillows, duvet, cooler bag, window blinds and an awning with chair and table were also provided and pack away neatly into the car. We had taken one large suitcase and two small rucksacks between us. The case (which is the largest Samsonite they make) fitted snug into the under-bed compartment – which I was actually surprised about! At first, mastering the bed fold down took both of us around ten minutes, but after a few days Simon could do it in less than two minutes on his own. The awning is also pretty simple and fast to erect.

Cool, but not cold

If you are renting the campercar in summer – be warned, this is a budget option so there is NO AIRCON. I’m probably a bit spoilt after spending a lot of time in the USA but I have never driven a car without aircon before, so I was quite surprised! However, we were there in August, with temperatures reaching 86’F (30’C) at times and it was fine. Lydia, the Spaceships rep who greeted us, told us to embrace the Italian driving style with the windows down. We did just that and it was fine. I was also surprised to find the car was a right-hand-drive (same as the UK) which does make driving slightly trickier (as Italians drive on the right side of the road) but if you’re travelling in a pair you can help each other at blind-sighted junctions and it’s not too bad once you get the hang of it.

The other facilities provided were a GPS SatNav (this may be an extra charge but, trust me, is essential!!) a stove and basic kitchen supplies. As well as a saucepan, frying pan, mugs, wine glasses and utensils, you also got a bottle opener (although ours was a bit rusty so we bought a new one along the road). The cooler that comes with the van isn’t very good so don’t expect to rely on it. We were going to buy a portable cooler but discovered that, oddly, you cannot buy pre-packed bags of ice ANYWHERE in Italy – we got a lot of strange looks when asking for ice in a bag. Again, we’re too used to the USA way I think!

Don’t use the plastic stove case as a table when using the gas stove. We had a slight situation when the bottom got so hot that Simon melted a large hole in it!!

We bought the company a new one to replace it (since it was our fault) but, actually, we often do this with our stove back home and have never had this happen before so I think the gas fitting was loose. It wasn’t expensive to replace (35 euro) but better to be safe than sorry!

The best bit about the van was that it is soooo economical! We covered just shy of 2000 miles and only filled up three times, spending approximately £120 on fuel, which was excellent. Italian radio (particularly in the countryside) is rubbish so bring an audio jack to plug in your ipod, crank up the tunes and off you go!

We had a fantastic time and covered so many places in just two weeks. It was one of our favourite ever road trips. Hopefully we’ll go back again this summer to do the places we didn’t get time to see on this trip. For an itinerary idea, you can click here to see what we did. If you’re still not convinced, here are six reasons to do a camping road trip in Italy. 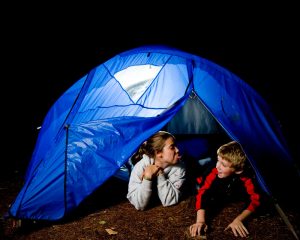