In 2021, the Disney Magic left her usual home in the Bahamas and sailed to the UK for a series of UK staycation sails. We were lucky enough to join the Disney Cruise Line in Southampton with our two children, Finn and Isobel, and we all had the most fantastic time.

Disney have just announced that next summer, it’s the Disney Dream ship that will be sailing from our shores and this time cruises will be docking in the UK, as well as Spain, France, the British Isles, Norway and Iceland. Dates are yet to be confirmed, but tickets are on sale from May 9th, with an advanced sale on May 2nd, so if you want to experience a Disney cruise from the UK, now is the time to strike!

If you have never cruised before, deciding which style of stateroom is best for your trip can be confusing. The good news is that Disney Cruise Line are widely regarded as having some of the best staterooms at sea. From high-end interiors, super comfy beds and just-that-little-bit-of-extra-space, compared to some other cruise lines, a stay on a Disney ship can completely change your cruise experience.

As expected with Disney, attention to detail, guest experience and a continuation of their strong brand identity means guests are treated to the very best during their sail. This includes Broadway-style shows, character interactions, quality dining and luxury staterooms. The Disney Cruise Line isn’t the cheapest cruise operator to sail with, but you are guaranteed a quality, high-end cruise experience, that is in some ways unrivalled due to the enchanting Disney theming and entertainment.

What different staterooms do the Disney Cruise Line offer?

There are four general stateroom categories on Disney Cruise Line, and although they differ slightly, these are pretty much the same across all four ships in the fleet (Disney Dream, Disney Magic, Disney Wonder and Disney Fantasy. Disney’s newest ship, the Disney Wish sets sail for her maiden voyage in July 2022).

The top tier staterooms are the Concierge Suites, which provide fancy accommodations for parties of 5 to 7 Guests and all have verandah balconies.

Oceanview Verandah Staterooms sleep three to five guests and offer private balconies. A Verandah Stateroom means you will have your own outdoor space to get some fresh air and enjoy the view. Each balcony has a small table and two chairs. Verandah Staterooms are particularly ideal for parents on a cruise with their children, as once the little ones go to bed, you can relax on the balcony without worrying about waking up the kids or having to sit in the dark, once they are asleep. I talk more about this in my cruising with toddlers post. Even if you don’t want to sit on the verandah, the ability to have the door open and get some fresh air was a priority for me.

Oceanview rooms are slightly smaller than the Verandah staterooms and have porthole windows that look out to sea, but no balconies, so you can’t open the window fully or go outside. These staterooms sleep three to four 3 to 4 guests.

Interior staterooms are inside staterooms that sleep three to four guests. They are similar in style to the Oceanview rooms but do not have a window or view of the outside. Despite this, interior rooms are often the first staterooms to sell out on the Disney Cruise Line because they are the cheapest. Some people often find they sleep better in an interior stateroom because they can be very dark. You may also feel less movement from the ship on choppy waters, due to their location in the centre of the vessel.

Why choose a Disney Ocean View Verandah Stateroom on the Disney Cruise Line?

The best way to choose the right room on a Disney Cruise Line holiday is to think about how you would like to enjoy your cruise. If you want to spend some quiet time away from the other guests, an Oceanview Verandah stateroom may be best to allow you that outside space and a bit of extra room. If you want to enjoy absolutely everything there is on board and don’t anticipate spending any time in the room, an interior stateroom will be fine as you’ll only be there to sleep anyway.

Travelling with two children under 5, we stayed in a Disney Oceanview Verandah Stateroom on the Disney Magic and it was perfect for us. As our children are energetic, we all had enough space to hang out in the cabin and there was enough room to put up Isobel’s crib. With so much to enjoy during the day, children were asleep by 9pm and Simon and I could sit on the balcony and have a glass of wine and some snacks. Room service is available in your stateroom 24-hours a day and most meal items are included in the price of your cruise, which is fantastic.

Our cruise on the Disney Magic

During our cruise on the Disney Cruise Line from Southampton, we celebrated Isobel’s birthday. Disney picked up on this and when we arrived to our Oceanview Verandah Stateroom, it had been decorated with birthday decorations for her. It was such a fantastic surprise and both kids were overjoyed.

Room for everyone in the Disney Magic Ocean View Verandah Stateroom

We were really impressed with the stateroom, which had more space than I was expecting. The rooms had been newly renovated and they were sleek and impressive. There was a large double bed (which I can confirm is very comfortable) and a living area toward the back of the room for relaxing in. Here, there was a sofa bed, large TV, mirror, desk and fridge. This space would also become Finn and Isobel’s bedroom, and there was a curtain separating the two areas, which is great. This meant that once they were in bed, we didn’t have to creep around in the dark on our side of the divide. Due to the large glass patio doors, the stateroom also felt very bright and airy, which was nice when were using it during the day.

When we first entered the stateroom, the children’s sleeping area hadn’t been set up. At first I became worried (with so many people boarding at the same time), however, we didn’t need to panic. Each set of staterooms has its own host, and he reassured us that while we were at dinner, Finn’s bed and Isobel’s crib would be set up. When we arrived back to the cabin, it had been prepared for bedtime and their beds had been lovingly set up. Although, Isobel wanted to sleep in with Finn, of course! 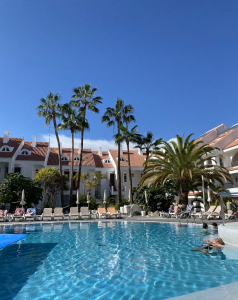 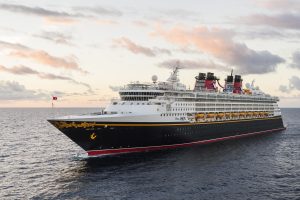 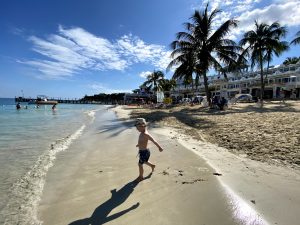 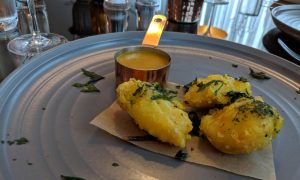