Home » Disney and Orlando » Disney Vs Universal: the best of both worlds

Disney Vs Universal: the best of both worlds

Welcome to passportstamps.uk. We are a UK-based family blog with 30+ helpful articles on how to plan your trip to Orlando, Florida. As well as our popular planning guides, hotel reviews, booking advice and sample itineraries, we also try to answer the most commonly asked questions around booking a Florida trip. Disney Vs Universal is definitely one that comes up time and again. Do you need to choose a tribe? Or is claiming allegiance to Disney World vs Universal Studios not required when there’s so much on offer in every park and plenty of ways to enjoy all the best of both?

In this post we’ll look at the differences between Orlando’s major theme park brands and the best of both parks for your group. Let’s break it down:

Disney Vs Universal: How it all began

Walt Disney World is the most famous theme park in the world and has been welcoming visitors in in Orlando since 1971 – marking its 50th anniversary this year with an epic 18-month celebration. When it opened, Disney just had one theme park (Magic Kingdom), which focused on wholesome family attractions based on famous Walt Disney Classic movies, such as Alice in Wonderland, Cinderella and Dumbo.

Expansions came over ten years later with EPCOT opening in 1982, Disney’s Hollywood Studios (originally MGM Studios) in 1989 and finally, Animal Kingdom in 1998. Today, the collective parks along with two water parks and a surrounding hotel and entertainment resort is known as Walt Disney World and is a whopping 27,000 acres.

Universal Studios opened much later, in 1990, just nine miles away from Walt Disney World. The original park opened with a Hollywood movie theme. Attractions included a Jaws boat adventure and interactive rides based on King Kong, Back to the Future and Twister. Universal’s second theme park, Islands of Adventure, opened in 1999 and this allowed the brand to expand into immersive, themed lands based on movie franchises like Marvel, Jurassic Park and Dr Suess.

Universal Orlando was instantly popular with fans, but the resort truly rocketed into the stratosphere with the opening of The Wizarding World of Harry Potter in 2016, making Universal Orlando one of the top reasons that millions of tourists visit Orlando every year.

How big is Universal? Is it worth the ticket money?

One of the main concerns people have when it comes to Disney Vs Universal is whether there is enough to do at Universal for the whole family in order to justify the ticket price. Despite being cheaper than Disney, Universal Orlando has only three parks, compared to Disney’s six, so it’s understandable that first-timers might worry there is far less to do. In fact, Universal Orlando packs a hell a lot into its resort, which itself spans 546 acres.

Harry Potter fans would think nothing of spending an entire day (or two) just at The Wizarding World of Harry Potter, and that’s in addition to all the other lands and attractions on offer. The Wizarding World of Harry Potter is situated within the Universal parks, and included with your entrance ticket. Hogsmeade and Hogwarts Castle can be found at Universal Islands of Adventure Park and Diagon Alley is based at Universal Studios park. The two areas are connected by The Hogwarts Express into Kings Cross station, of course!

You will need a multi-park ticket to ride the Hogwarts Express and visit each aspect of The Wizarding World of Harry Potter. This area alone has some of Orlando’s most epic rides, including Hagrid’s Magical Creatures Motorbike Adventure and Harry Potter and the Escape from Gringotts. Those who don’t like thrill rides can choose a wand at Ollivanders Wand Shop during an interactive experience, shop for chocolate frogs at Honeydukes and enjoy the view as a Ukrainian Ironbelly dragon breathes real fire.

What else is at Universal Orlando besides Harry Potter?

Aside from Harry Potter fandom, there is so much more to see and do at Universal Orlando, including the newest rollercoaster, the Jurassic World Velicoaster, whole lands based on The Simpsons and Marvel and even a Fast and The Furious attraction. Younger children can dance with The Minions and enjoy a host of wacky rides at Seuss Landing, a colourful world based on the curious stories of Dr Seuss.

There is enough to do at each park to enjoy a whole day at each, including a wide choice of restaurants and entertainment both inside the gates, and outside at Universal’s entertainment area, Universal Citywalk. And the cherry on top is Universal Orlando’s fantastic water park, Volcano Bay. A three-day Universal Park Explorer ticket for Universal Orlando is £285 for 14 days and there is so much packed in to every park, it is well worth the money – you won’t regret it. (You can buy a two day ticket, but it is currently the same price as the three day).

Disney Vs Universal: What Disney does best

Looking at the differences between Disney World Vs Universal Studios and working out what each park does best is tricky. Ultimately they offer a very similar experience, but both brands have their own personality.

Walt Disney himself described Disneyland (California) and Walt Disney World as a way to create happiness through magical experiences. Many visitors head to Disney Parks for the opportunity to escape into the magical world of their childhood. Walt Disney World certainly provides that and more. Attention to detail rules supreme here, with hidden touches that most guests on a first visit won’t even notice. As the old cliché goes, there really is something for everyone. Attractions and visual delights that encapsulate the whole family as well as stand-out attractions and lands (Toy Story Land and Galaxy’s Edge in particular) that offer a, yes magical, immersive experience you cannot find anywhere else.

Universal Vs Disney: What Universal does best

Whether it’s the sound of iconic themes from the likes of Jurassic Park and Back to the Future playing as you approach the gate, sending tingles up your spine, or a glimpse of Hogwarts Castle on the horizon, from the minute you arrive at Universal Orlando, excitement is buzzing. If you thought that Universal maybe doesn’t offer the same experience as Disney, you would be greatly mistaken.

Universal Orlando brings the films we know and love into reality. Like Disney, it’s magical, but the magic you experienced the first time you went to the cinema and couldn’t believe your eyes. There is something for every age, but the most popular rides are the park’s thrilling rollercoasters – some of the best in Orlando. The all-new Jurassic Park Veliocoaster, Incredible Hulk Coaster, Hollywood’s Rip Ride Rockit and Hagrid’s Motorbike Adventure, to name just a few. The park has attractions that appeal to every age group, from The Minions to Men in Black. And of course, the thoroughly immersive Wizarding World of Harry Potter is as epic as the books and films – and maybe even more so.

Does Universal have enough to do for toddlers or is Disney better for little kids?

We recently visited Universal Orlando with our three year old and he absolutely loved it. As well as parades, character appearances and shows, there are designated lands designed with younger guests in mind. Seuss Landing is a bonkers colourful zone with rides for any age, a playground and lots of fun things to capture the attention of a baby or toddler. There is also Toon Lagoon, featuring classic characters from original comics and Marvel Superhero Island, where Finn got to meet his favourite, Spider-Man.

Many parents focus on rides and height restrictions, but with both Disney and Universal, the real joy for children at the parks is the experience of being there and taking in everything around them. Finn couldn’t ride anything at Jurassic World, but he loved seeing the dinosaurs, meeting a Raptor and the discovery centre. We spent ages just standing on the bridge over Dudley Do Right’s Ripshaw Falls watching the boats drop down – he thought that was brilliant. And of course, going to the steam train (Hogwarts Express) was a highlight!

We stayed at the Surfside Inn and Suites at Universal Orlando Resort, which is perfect for families. We had a two-bed suite with a kitchenette and it meant that Finn had his own room and we were able to stay up watching TV and have a drink once he had gone to bed without disturbing him or sitting in the dark (every parent’s bug bear).

Disney Vs Universal: Is Universal better for teenagers?

Like most things, when it comes to Disney Vs Universal, it very much depends on your teenager. If rollercoasters and cool franchises like Fast and Furious are what they want, then Universal Studios is perfect. If they love Star Wars, Walt Disney World will probably be the highlight. In truth, there is plenty to entertain teenagers at both Universal and Disney, and they will love it!

If I had to pick a park for teenagers, I would say Universal’s Islands of Adventure probably edges out the others. The range of rides, from Jurassic Park Velocicoaster and Jurassic River Adventure to Transformers, Hagrid’s Magical Motorbikes, Incredible Hulk Coaster and Reign of Kong offer teens ultimate fun and thrills, but they’ll enjoy the slower, fun attractions like Popeye & Bluto’s Bilge-Rat Barges and The Amazing Adventures of Spider-Man too.

Does Universal Studios have fireworks?

Yes, Universal does have fireworks. The Wizarding World of Harry Potter at Universal’s Islands of Adventure has a fantastic light and fireworks show that illuminates up the sky over Hogwarts Castle. In high season, shows are twice nightly and there is also a dedicated, festive, show that runs over the Christmas period.

At Universal Studios park, you can see Universal Orlando’s Cinematic Celebration, an outdoor movie, water and light show that showcases the magic of the movies.

As well as the main theme parks, there is also a Walt Disney World v Universal Waterpark offering to consider:

Walt Disney World has two really great water parks, Typhoon Lagoon and Blizzard Beach. Typhoon Lagoon has been closed for refurbishment, and during Covid-19, but is rumoured to be reopening at the end of 2021.

Blizzard Beach is currently open, and features one of my favourite (scary) waterslides, Summit Plummet – a drop slide sending you swooshing down a 120ft mountain at 60mph. Of course, all the parks feature lazy rivers – just what you need after a busy week at the Parks. **Visitors should be aware that Blizzard Beach is scheduled to close for refurbishment on 26th December 2021 for maintenance and is expected to reopen in Spring 2022.

Over at Universal Orlando, there is the new Volcano Bay Water Theme Park. We absolutely love this tropical paradise featuring a huge beach, lazy river, family slides, and some exciting fast slides, including the terrifying Ko’okiri Body Plunge, that has a 70-degree-angle, 125ft drop from a collapsing floor. The park has a Polynesian theme which really puts you in the holiday spirit and the tropical cocktails are pretty good too!

So there you have it, in the test of Disney V Universal, it’s almost impossible to choose – you’ll just have to do both! Find out more about the best tickets to buy for your trip and for information about the SeaWorld parks, click here.

Check out more of our helpful Orlando posts:

How much does a Disney World holiday really cost?

The cheapest way to book a Florida holiday

What else is there to do in Orlando besides theme parks?

What is happening for Disney’s 50th Anniversary?

Is staying in a Disney hotel worth the money?

What is the best hotel at Universal Orlando?

What to know before renting a villa in Orlando 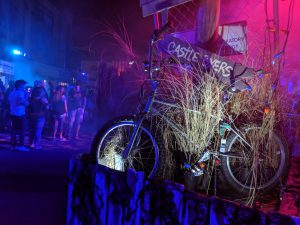 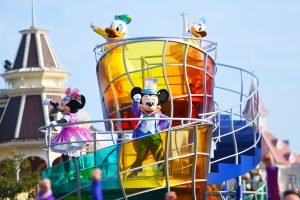 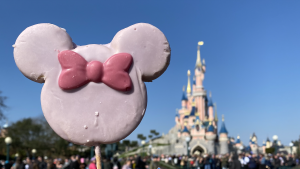 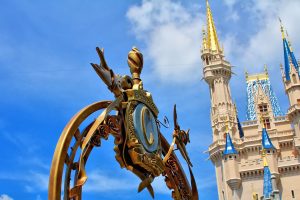