Election fever has reached boiling point and soon we’ll know whether it’s Trump who trumps or Clinton that clinches the prize. But if, like us, you think US politics have become more of a drama than the TV shows that depict it, ignore the noise and take a look at the quiet supporting act in the presidential circus –the city of Washington DC. We had only 48-hours in Washington DC and wanted to see as much as possible. Heading to the political epicenter of the USA, I was expecting a soulless splatter of government buildings, news corporations, traffic jams and concrete and I was surprised to find completely the opposite.

Washington DC is a really pretty city with the National Mall being a good place to start. I heard it carries the nickname ‘America’s front yard’ and is the most visited national park in the USA. In spring, the Tidal Basin (a man-made reservoir in West Potomac Park) is lined with a spray of pink cherry blossoms, a gift from Japan since 1912. We were there in autumn but the two-mile, tree-lined stretch between the US Capitol Building to the Lincoln Memorial is a must for any first-time visitor. Bring your comfy shoes; this is a city where you’ll most definitely clock up some steps on your FitBit because exploring on foot is the best way to see it.

There’s no shame in being a tourist here. From history buffs to trendy Instagrammers and those who just want a selfie with Lincoln, there is no shortage of things to see. Wave your map with pride and start your self-guided tour of the capital. We were short on time so we started half way down the Mall at the iconic Washington Monument. Built to honor George Washington, the United States’ first president. Inside the 555-foot marble tower is currently closed to the public but the iconic structure is better viewed from outside, so don’t be disappointed.

From here, we passed the impressive World War II Memorial, Constitution Gardens and the Vietnam Veterans Memorial, finally arriving at the Lincoln Memorial and reflecting pool. The Lincoln Memorial was my favourite. The giant seated Abraham Lincoln sat on his perch, looking out over the city is such a familiar image and I was excited to see it first hand. The view from the top of the steps back along the Mall is also magnificent. At the memorial we met a Vietnam War veteran named Jim who was visiting for the first time and was overwhelmed by the city and its tributes. Beautiful structures and historic memories take on a whole new meaning when you view them through the eyes of someone who has lived through their legacy.

To the side of Lincoln, you will also find the Martin Luther King Jr. Memorial, the Korean War Memorial, and – for fans of Hamilton – the Thomas Jefferson Memorial. Written down, this does feel like a memorial overload but the park is beautiful and a stroll taking in all these points can be done in half a day if you’re strapped for time. Sights aside, it’s just a lovely place to stretch your legs and get some fresh air away from the city streets.

There are certain (unofficial) things that US-cities have to do to earn their hipster stripes and having a food truck scene is one of them. Luckily for our stomachs, Washington DC is having a foodie boom and the huge selection of food trucks that cruise the city make up a large part of it. Since we were in tourist mode we headed to the nearest spot (17th Street, between the Mall) where a tasty tailback of food options is lined up ready to feed hungry sightseers. Henry was like a kid at Christmas running up and down and trying to decide which to sample. We ended up with something simple like a Philly Cheese Steak but you could choose anything from Pho to burritos and pretty much everything in between. Look out for D.C. Empanadas, said to be a favourite of Barack Obama after he tweeted about them back in 2011.

Talking of the Prez, clearly everyone who comes to DC for the first time arrives in pursuit of that infamous selfie and we were no exception! Apart from the border fence that surrounds it and the armed guards patrolling the roof, the White House is charmingly on show. The best view (with less crowds) is at the back of the building on the north side (Pennsylvania Avenue). This fab site gives advice on how to get the best pictures of the White House, for those who take their Instagram very seriously.

I didn’t know this in advance (bad journalist!) but you can take a tour of the White House, which includes the State Dining Room, the China Room and the Library; but not the Oval Office. Unsurprisingly, you can’t turn up and just knock on the front door. Tour requests need to be made through your country’s embassy in Washington DC up to six-months in advance so most people settle for a peek through the fence. Outside, election fever was in full swing with campaigners lining the square.

Believe it or not, the whole of Washington DC isn’t about the ghosts of presidents past, present and future. Other people actually live and work there and while they’re not quite next door neighbours to Barack and Michelle, the city has a rich pick of quirky neighbourhoods.

Depending on who you speak to, H Street Corridor, an area originally known for the riots surrounding Martin Luther King’s Jr’s assassination, is the ‘cool up-and-coming’ bit. These days apparently the ‘H’ is for hipster with cool clubs, independent shopping boutiques and restaurants popping up all over town. For hip-meister-10 marks, check out Maketto, a very cool local business hub which is a shop and café during the day and a cool restaurant at night. Also in this block is the renowned Ben’s Chilli Bowl – another Obama lunchbreak favourite – chow down on hot dogs and chips topped with chilli for the ultimate presidential binge.  After hours, we were tipped off about a dumpling shop-cum-cocktail bar, Copycat Co, which is open until 3am some nights and after more than a few craft ales down the street, it was the perfect place for a nightcap – and the munchies.

There are no lay-ins in this town because there was so much we wanted to do in so little time so we were up bright and early for breakfast in perhaps Washington DC’s prettiest district, Georgetown. First stop was for coffee and muffins at Baked and Wired, who are also known for their delicious cupcakes so we may have bagged one or two for the road.  The cobbled streets of Georgetown, again, are great for just aimlessly wandering and soaking up the atmosphere. The weather was a bit drizzly sadly but I can imagine the colourful houses and perfectly manicured streets look gorgeous in the sunlight. For a quick top-up of presidential history, seven of the former homes of JFK and Jackie Kennedy are located here (walking tours are available) and you can even pop into the G. Martins Tavern 1264 Wisconsin Ave NW where John allegedly proposed to Jackie in Booth three, way back in 1953.

Museums are always a tricky one for me, especially when I am in a new city for only a few days – with so much to see of the place itself it’s hard to dedicate even a half-day indoors and, with some exceptions, I usually leave them for a second or third visit. Washington DC is relatively small by US-city standards (at least, the parts that most tourists want to see are) and I was blown away by the incredible options here, most of which are free thanks to the collection of Smithsonian Institute museums.

The Smithsonian Institution was established with funds from a British scientist called James Smithson who left his estate to the United States in 1829 for the ‘increase and diffusion of knowledge’. Thank you very much James! It’s impossible to get around them all in one short visit but they include the newly-opened Smithsonian National Museum of African American History and Culture, the Museum of National History, the Air and Space Museum and the National Zoo. We opted for the National Museum of American History – which houses the original ruby slippers from The Wizard of Oz (oh my!), the original ‘apple mac’ computer, Prince’s purple guitar and Michelle Obama’s stunning Jason Wu inauguration night dress – among many other things. In the few hours we’d allocated, we barely covered half of the epic collection and I have already decided it will be my first stop when I go back to Washington DC.

It’s not part of the Smithsonian group, so entry is US$22.95 + tax for adults, but the modern Newseum gives guests an in-depth look at how news is broadcast around the world, including every newspaper front page the day after 9/11 and the opportunity to play newsreader in a virtual TV studio. There were also some stunning temporary exhibitions on when we were there – a look into how the FBI investigates and foils acts of terrorism and a showcase of Pulitzer prize-winning news photographs dating back to 1942. Hopefully this becomes a permanent exhibit as it was absolutely brilliant. Some of the incredible images left me in tears.

By early evening time was chugging on and there was still so much we wanted to see. To give our legs a bit of a break we cruised the other key sites of DC by riding Segways across town in a super silly but fun tour with Bike and Roll DC. Neither Henry or I had ever been on a Segway before so thankfully there was some safety training on a flat surface before the tour began. Once we had the knack of stopping, starting and standing upright we were off to follow the paths of Lincoln, Jefferson, Clinton (Bill) and Obama – in a rather different way to that of the world leaders. The tour, which covered all the major monuments, was informal but packed with info and we had a lot of fun burning through the streets of Washington, embracing the silliness and waving at bemused passers-by too.

With the tour finishing at 9pm and a whole day pounding (and wheeling) the streets of Washington behind us, we couldn’t manage another night out on the town. I couldn’t believe it; the quiet, unassuming town of Washington DC had ruined us. During our visit we were staying at the Sofitel Washington DC, Lafayette Square, which is a few blocks from the White House. Admitting defeat we decided to stay in and get room service – declaring that since we were Obama-adjacent it still counted as getting a taste of the capital.

Robes on and ready for an early flight out the next day we watched old episodes of The West Wing on TV (we actually did this!) and decided that we hadn’t allowed ourselves enough time in Washington DC. Another night would have been perfect. We both agreed that America’s capital city had exceeded all our expectations and we would definitely be back soon. And when we do, there will be a whole new first family living next door…

PS: This is a great website if you want to find out more about Washington DC and the surrounding area, www.capitalregionusa.co.uk 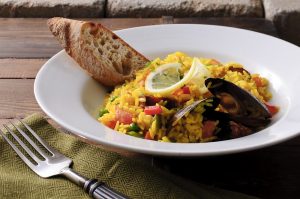