Home » Blog » After Paris… Why tourism can fight terrorism

After Paris… Why tourism can fight terrorism

The world is small. So small we can travel 1500 miles in three hours. Our generation is luckier than any that came before us. The Sydney Opera House is on our doorstep. The Masai Mara is our back garden. A train to France is cheaper than a return to Leeds and any time of the day or night you can fall asleep in London and wake up somewhere else. But sadly, as this weekend has brutally reminded us, the heavy price we pay for this privilege is terrorism. Of course, travel and tourism are not to blame for terrorist actions, but the access-all-areas pass to the world has opened the door to everyone and evil will inevitably creep in.

This year we watched for the second time as Paris suffered indiscriminate violence at the hands of ISIS terrorists. Topping the bucket list of dreamers around the globe, the city of light inspires travelers from every corner to fly in and celebrate love, culture, fashion and food. For us, it’s just a train ride away – our stylish cousin, where I spent my 30th birthday and many a drunken night dancing until dawn. With over 16 million visitors a year, Paris is the third most-visited destination in the world. How many will cancel trips or change their plans to opt for a holiday somewhere else they perceive as ‘safer’? The truth is, in today’s age of terror, no place bursting with life is safe from the threat of death. The brighter the light, the louder the music, the wider the joy – the more likely a place is to become a target for darkness and hate.

Six of the top 10 most visited international cities have suffered at the hands of extremist terrorists. At least ten of those who died at the Erawan Shrine in Bangkok were foreign visitors. In Tunisia, 21 innocents were shot down at the Bardo National Museum and then three months later a gunman on the beach at Sousse killed 38 holidaymakers. On a train in Madrid, 191 lives were robbed. No one is confused by the combination of numbers nine and 11. My beloved London was the target in 2005.

Attacks on tourist hotspots are not new, but today’s climate of instant news will brutally stream the atrocities live into our living rooms, imprinting panic onto our subconscious. When I was travelling in 2002, the bombing of a nightclub in Bali killed 202 people – mostly backpackers. I changed my route and went to Fiji instead. I regret doing that now, but I was scared. In reality, the total number of tourists killed by terrorists is a tiny proportion of the billions who have travelled safely. The best way to support countries that have come under attack is to visit them first hand. Fill your Facebook with wonderful tales; litter your Instagram with defiant optimism. Tourism isn’t only accountable for suntans and souvenirs. Beneath the lure of golden beaches is an industry that brings countries and cultures together and helps them understand each other better. It’s a lifeline for tiny villages and remote places that rely on the wanderlust pound to survive. Terrorism threatens to destroy that. But with the spirit of united communities glowing in the darkness of murder and terror, they won’t defeat our desire to get out and see the world.

According to national statistics, after the London bombings the number of visitors to the UK did not decline. Today, on TripAdvisor, a discussion about safety in Tunisia rumbles on. Ian H from Bolton, encourages a stranger to remain excited about her family’s holiday. ‘Don’t panic and enjoy your hols, we will be there in July with not a care in the world. Have a great time’. I would like to meet Ian and shake his hand. He will almost certainly have a brilliant and safe trip. I have been to Tunisia and felt nothing but love for the people and the place. It breaks my heart to read that local industry has suffered. Time will heal and tourism can grow. It will take time but there is hope and we can help.

Protest with your passport. Pray at the faraway temples of different cultures. Fear, instead, that you will never smell Japanese cherry blossom, eat street food in Vietnam or witness the northern lights. Fear that they will win and do everything in your power to stop that from happening. Go to Paris; breathe in the life that beats from every cobbled stone. Dance in the Bastille, walk along the Seine, remember those whose chance to do that was cruelly taken. The radicals want us to be afraid, for terror to close the skies and fear to ground us. We will travel and continue to marvel at the world because that’s all we can do.

Stand up and be counted. 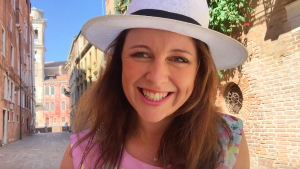